Lumintop Tool is well known as the first shortest AAA flashlight using clicky switch on its tailcap. I have read many positive reviews about this flashlight before but I haven’t got any chance for a hand on experience. Until one day Abbie from Lumintop contacted me and asked me to review this famous little light.

Here’s Lumintop Tool AAA inside its original box, simple package and neat. You can purchase yours on their Amazon store or any retailer nearby. Now they also sell Lumintop Tool Copper which is made from copper material and using Nichia 219B LED emitter. 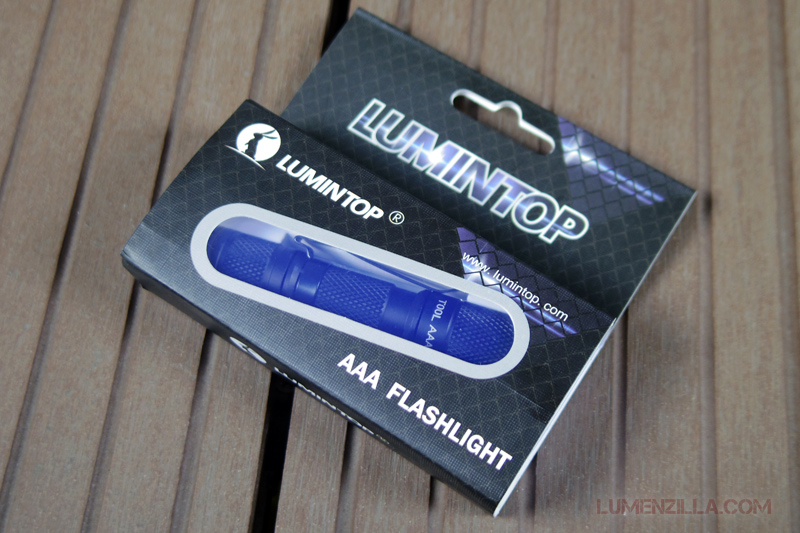 After opening the box, here are what I found inside the cardboard box: 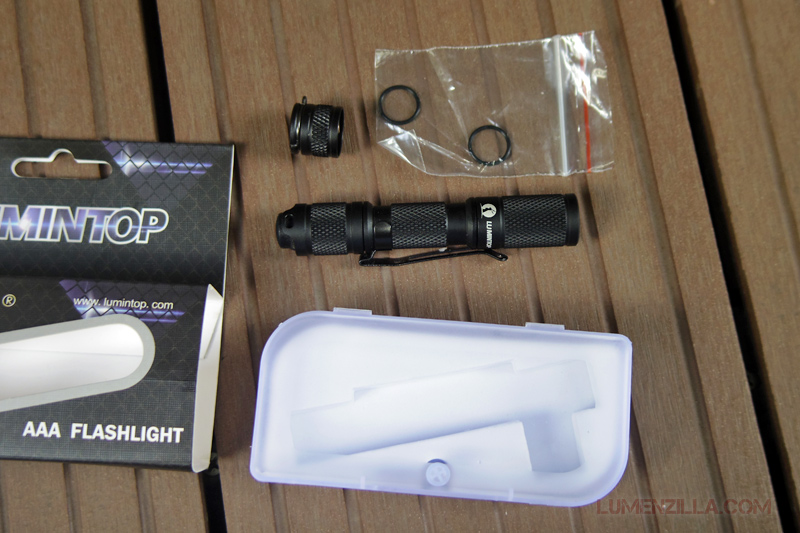 As far as I remembered, Lumintop Tool originally came only in clicky version without additional tailcap for twisty fans out there. The rubber boot on the switch was also taller than this one I received. 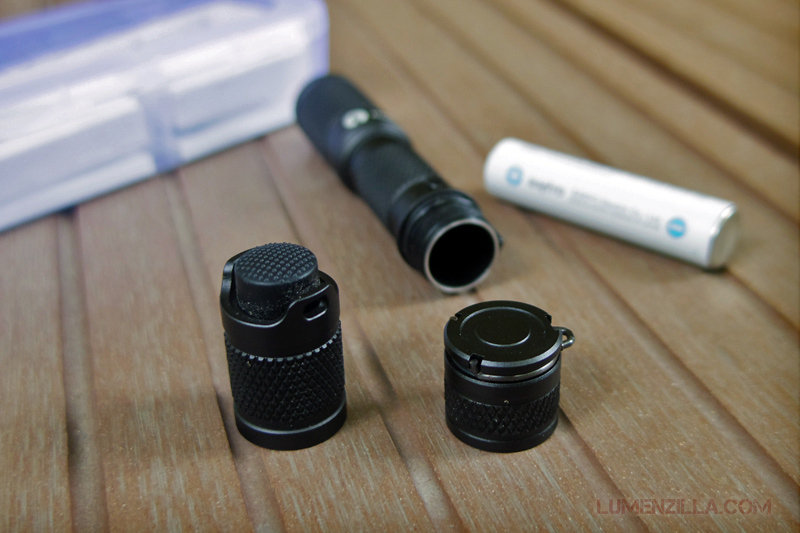 On the picture below, it shows you the head’s and tail cap’s metal contact. You can see that the clicky tail cap is using somewhat lower quality spring compared to the one used in magnetic/twisty tail cap. I wish I had any better multitester to check resistance value from both spring materials. 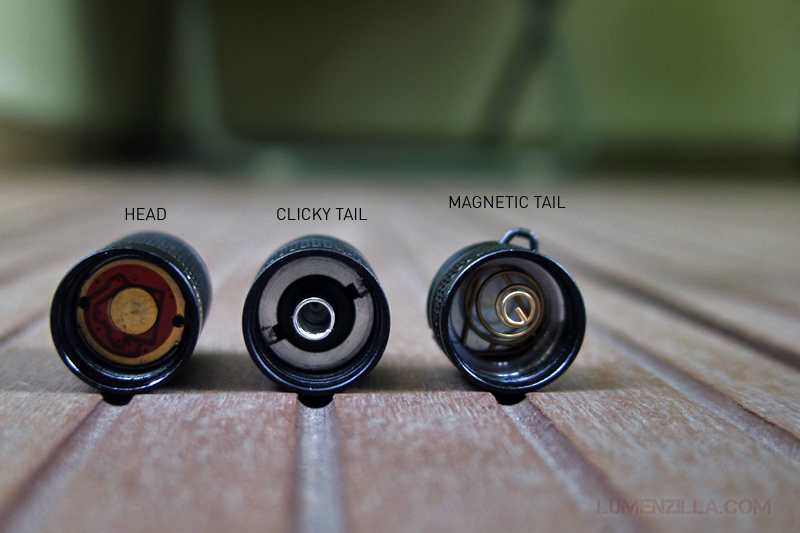 Now let’s talk about the main component of any single flashlight on earth. A well-centered XP-G2 R5 LED is placed inside the head, a common choice for small flashlight to get more “throwy” light. Later, I found that it’s pretty easy to disassemble its head thus give us options for possible LED swap.

A “glow in the dark” rubber ring also placed between the orange peel reflector and the lens, give you a nice greenish illumination in the night. But I found that the rubber is not glowing for a long period of time, so it can’t be used as flashlight “locator”.

For this review, I use Eneloop AAA Lite just because I have one pack unopened. Later I found that Eneloop Lite doesn’t have enough juice for an EDC flashlight. My false, Eneloop Lite is designed for low energy device such as household’s remote controls. 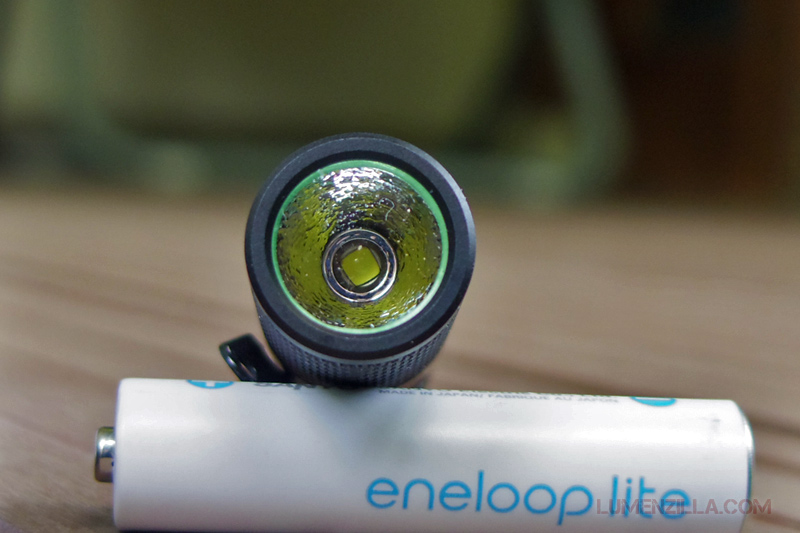 Swaping tail cap is a no brainer task. Simply unscrew the original clicky cap and replace it with another cap. Plain easy. 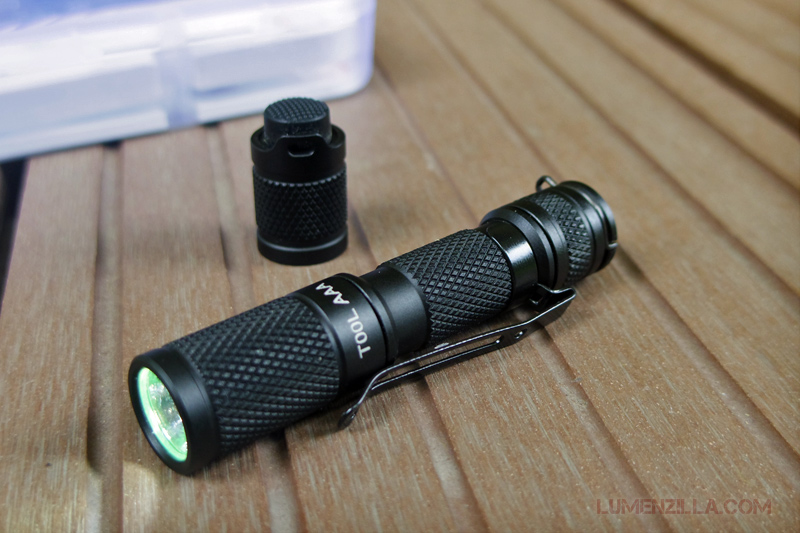 The twisty cap is shorter and has magnet ring inside, allowing us to attach this Lumintop Tool into any metal surfaces.  It’s a handy feature and frees our other hand when both hands are needed. No more teeth needed 😀 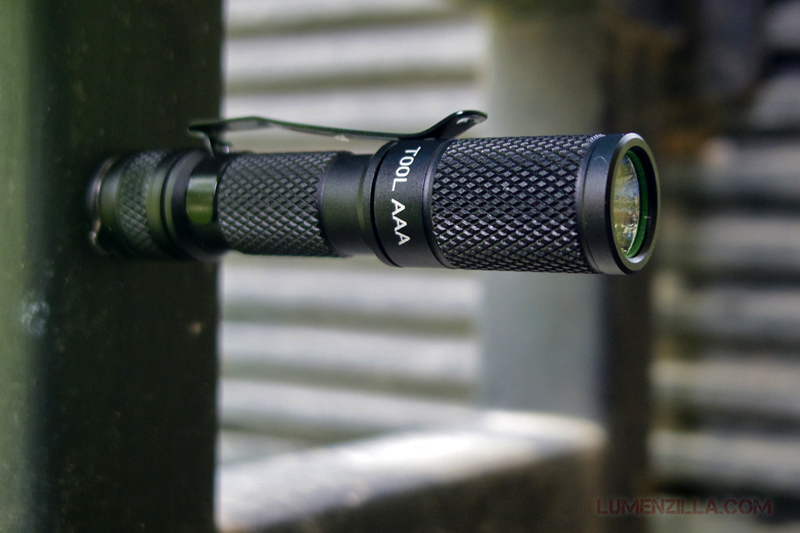 Lumintop Tool’s size is pretty small but not too small, here’s how it looked on my palm. 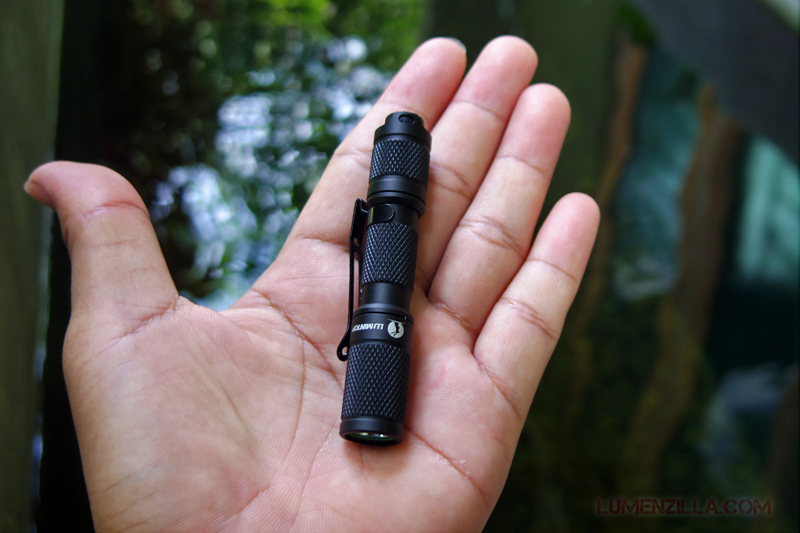 It has nice knurling all over the body so I can grip it firmly in my hand. I prefer clicky over twisty and I found that I can click the switch easily, thanks to its high profile rubber switch. 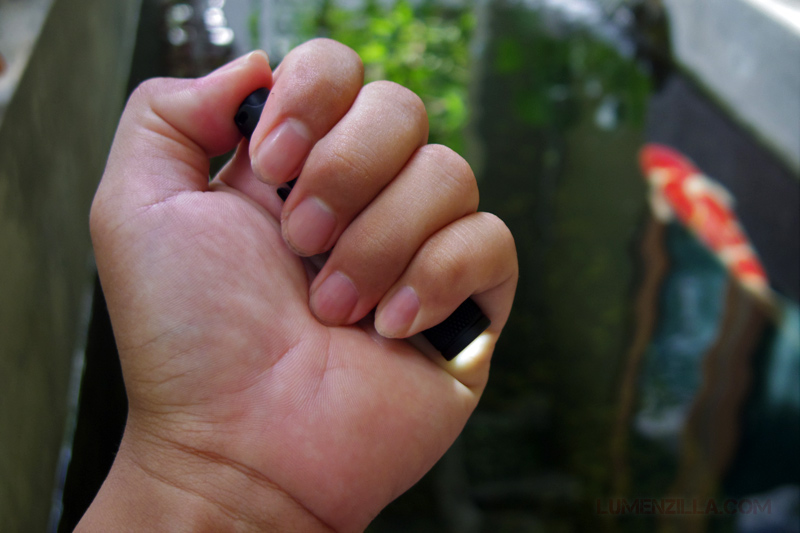 It’s also has the right size as my small folder knife’s companion. Here’s how it become a nice looking pair for my Spyderco Dragonfly. 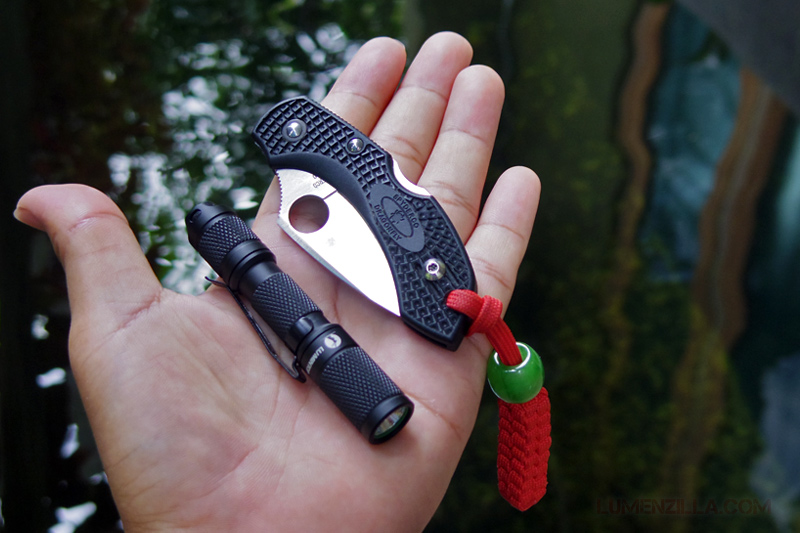 Lumintop puts a thin but strong clip for this Tool. It keeps the flashlight secured while I carry it inside the coin pocket or any other pocket.

The clip position is also reversible for your convenience. 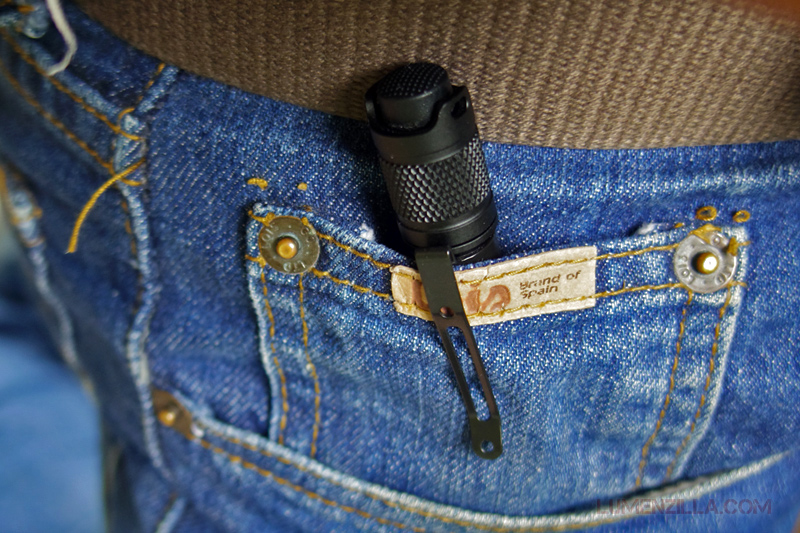 It would be great if Lumintop also made optional clip for deep carry. It can be sold separately and I believe many Lumintop Tool users will purchase it for theirs. 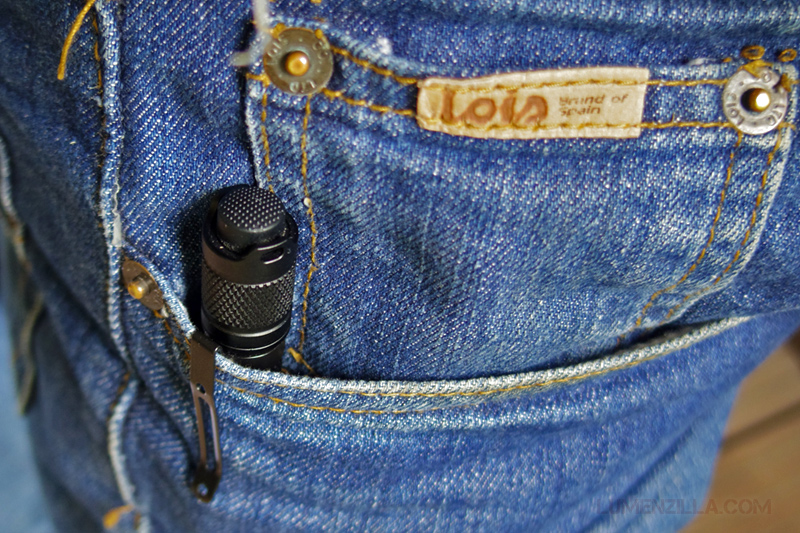 All flashlights are in their highest brightness level but not for Hugsby XP1 because it only has single mode. 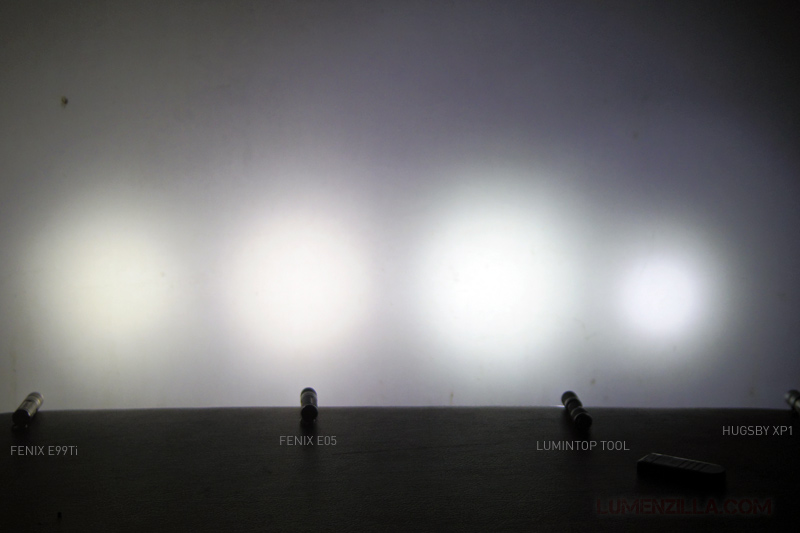 Lumintop Tool has 3 brightness levels and always starts from Medium, then goes to Low, and High. It’s not my favorite mode spacing but I know some flashlight users who like MLH mode. 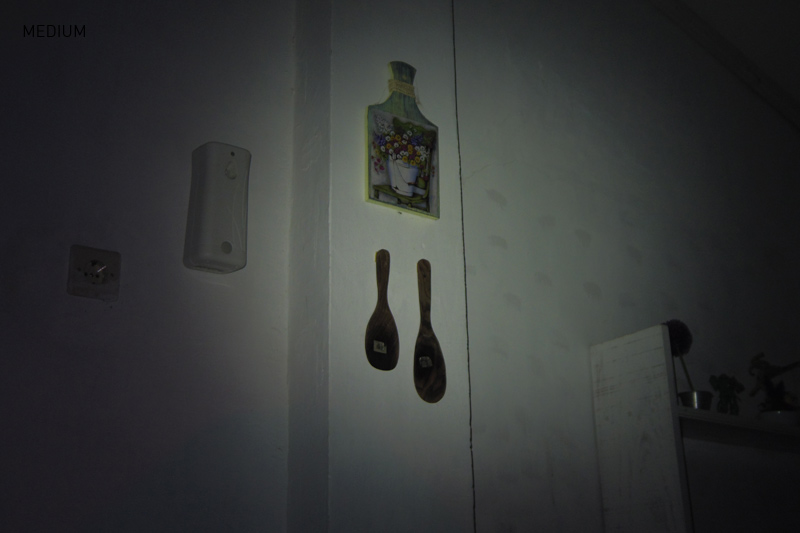 Then switched to Low mode.. 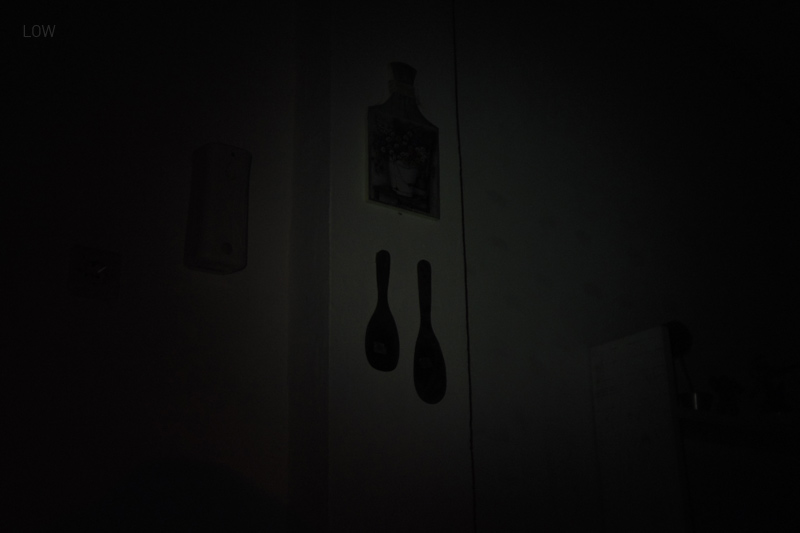 And then High mode, pretty bright for an AAA flashlight. 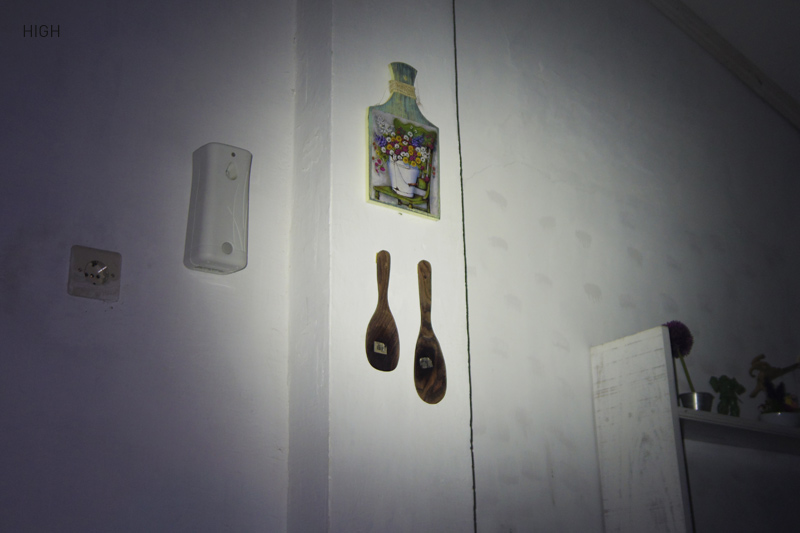 After carrying it for several weeks, I found many benefits and some point that I think can be improved in the future that will change this Lumintop Tool as killer AAA flashlight.

Lumintop Tool AAA by any means is a perfect EDC flashlight. Powered by a single AAA battery easily found anywhere, you’ll never find this flashlight as useless. Put it in your glove compartment on your car, drop it in your bag’s pocket, your wife’s pursues, or anywhere you can imagine of.